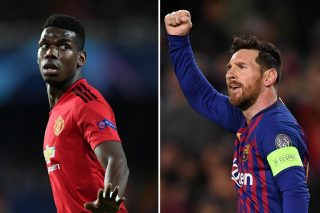 If Ole Gunnar Solskjaer does somehow manage to do a Roberto Di Matteo and steer Manchester United to Champions League glory 20 years on from his finest hour, no one can accuse him of having it easy.

Juventus. PSG. Barcelona. Three giants of the European game, three genuine heavyweight sides who set out on their Champions League journey as among the favourites to go all the way to the final in Madrid. Football’s fickle fate must have a very warped sense of humour to pair United with all three. But to be the best you need to beat the best, and they don’t come much better than Barcelona.

Ernesto Valverde’s 2019 Barca may not be the vintage of their Pep Guardiola 2009-2011 peak (let’s not talk about that, right…), but they are a club, a city synonymous with football par excellence. Sitting eleven points clear at the top of La Liga, they are far more than just a certain fella by the name of Messi. A solid spine of Marc – Andre ter Stegen, ex-Red Gerard Pique, probably the world’s finest left-back in Jordi Alba and the unfamiliar revelation of Arthur in the middle. Then there’s the return of old foes –  step forward Messrs Luis Suarez and Philippe Coutinho. A plethora of talent as far as the eye can see.

But, having suffered three successive quarter-final defeats (an omen, maybe?) and a shambolic 4-4 draw with Villarreal last week, Barcelona are prone to the occasional mental lapse just like PSG who collapsed so gloriously and improbably against Solskjaer’s United in the last 16.

The cast list may be different for last time, but new heroes are waiting to be acclaimed and these are two ties that will stir the emotions. With Ole at the wheel, it does feel like anything could be possible. A Spanish side has won the past five editions of the Champions League. Can United ensure that run will not be extended by another season? One thing’s for sure – Manchester United should never be written off.

Paul Pogba missed that never-to-be-forgotten night in the Parc des Princes – a night which feels like a lifetime ago now – but the Frenchman will be available again having served his ban. Marcus Rashford (ankle) and Ander Herrera (injury/speculation) sat out the defeat at Wolves last time out but are expected to feature against the Catalans.

Solskjaer is yet to deliver his pre-game presser, but it is expected that he will be without Matteo Darmian, Eric Bailly, Antonio Valencia and Alexis Sanchez.

United have suffered a disappointing dip in form since climbing off the canvas across the Channel, and I feel that Barcelona will ultimately be too strong over a two-legged tie. But never count United out, Old Trafford will be a picture of noise and atmosphere, and the Reds will need to get into Barcelona from the off. This is very much a free hit and a bonus game with all the pressure on the Catalans, and I think United will get a draw.