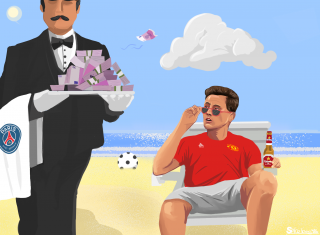 Ander Herrera’s top red credentials have been talked up over the years. For someone who supposedly ‘gets the club’, why would he now jump ship when Manchester United have offered fresh terms?

Paris Saint-Germain can sign Herrera on a Bosman when his contract expires this summer, and it sounds like they’re offering silly money with United reportedly reluctant to meet the Spain international’s wage demands, as per James Ducker of The Telegraph.

This may come as a blow, but it’s nothing significant. Fans should refrain from making Herrera out to be something he isn’t.

Pardon my language, but nobody is bigger than the club and the £200,000-per-week he’s allegedly demanding (via The Sun) takes the biscuit.

Of course, Ole Gunnar Solskjaer won’t want to lose Herrera this summer, he’s a starter in the current team but the club would be mental to give in.

United are still miles off the pace, both domestically and in Europe, so perhaps a number of departures this summer wouldn’t be the worst thing, especially if they are players who want to give up Old Trafford for more money elsewhere.

Herrera is exactly the type of player I would be happy to see on the bench or as a rotation option, which is exactly why he’s not worth paying over the odds for.

I don’t hold anything against Herrera. If he wants this PSG deal to be his last big contract, who am I to say he shouldn’t go ahead with it? It just makes a joke of those who previously talked up his top red credentials, which I am also guilty of buying into.

‘Drinks Estrella by the cask, he’s not Spanish he is Basque,’ goes the chant sung on the terraces by the United faithful.

Herrera may not be anywhere near the best player we’ve seen in a Red shirt, but the majority of United fans adore the former Athletic Bilbao midfielder. I wonder how they will react if he’s had his head turned…

During his five years at the club, Herrera has shown a great degree of shithousery on the pitch, which many of us enjoy. Rivals don’t like him because he’s a professional piss boiler who frustrates opposing players.

Chief Shithouse I would name him if he pulled a U-turn and signed a new deal at United instead of joining PSG.

The type of lad you wouldn’t mind keeping around this United team, but it wouldn’t be the end of the world if he packed his bags either.