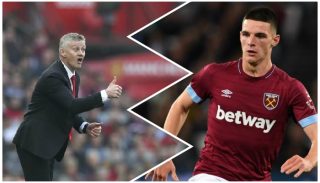 Given his stellar performances in the Premier League this season, it is no wonder that Manchester United are eyeing up a move for West Ham midfielder Declan Rice.

The 20-year-old who controversially pledged his allegiance to England at international level has enjoyed his breakthrough season at the London Stadium, with the Hammers in contention for a top half finish in the Premier League.

Rice has featured in over 30 matches for West Ham across all competitions this season, and there are high hopes for his future in the game with Gareth Southgate keen to have him part of the England squad.

NEXT: Hargreaves tips Man Utd to finish in top four, Arsenal and Chelsea to miss out

According to Kevin Palmer of The Irish Independent, Rice is on United’s radar this summer, with the club eager to seal a deal when the transfer market reopens.

The report claims West Ham will only listen to offers within the region of £50 million, but if United really want Rice that shouldn’t be a problem.

Moreover, Rice currently earns £30,000-a-week at West Ham, whereas at Old Trafford his salary would be at least doubled.

United are light in midfield as it is but also lose Ander Herrera this summer when his contract expires. The word on the street is that he’s headed to PSG to earn crazy wages, though we’ll still wish him the best.

The question is where is Rice best on the pitch? We’ve seen him play in midfield a lot this season, but his favoured position is in defence. You can see that influence in his game when played in the centre.