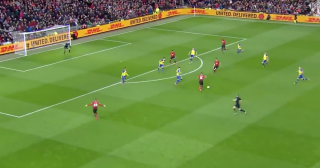 And what a stunner it was!

NEXT: Zidane linked with shock £35m transfer, Man Utd will listen to offers

Ole Gunnar Solskjaer had just given Pereira a different role in the team, something closer to what he was used to as a youth player in the club’s academy. At the beginning of the season he filled in for the absent Nemanja Matic almost as a holding midfielder, but he has now been moved further up the pitch.

The Norwegian quickly saw the benefits of giving Pereira a more advanced role in the team.

Although the goal was brilliant, Pereira must now kick on and fight for his place. Matic and Herrera are both replaceable but the club will likely bring in two more central midfielders in the summer, especially if Ander Herrera’s contract expires.

Congrats to Pereira. Check out his goal below.

There was always only one winner…@AndrinhoPereira‘s stunner v the Saints is our March Goal of the Month! ✨ pic.twitter.com/34GYRyyBlR