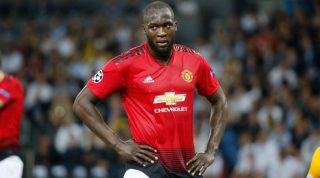 The Belgian striker joined United from Everton in 2017 and has scored 42 goals in 90 matches.

With over three years remaining on his contract at Old Trafford, so the ball is firmly in United’s court. Although his representative, Federico Pastorello, says his focus is on the pitch at the moment.

“At the moment he is very focused on finishing the season,” Pastorello told Sky Sports News.

“The competition for third and fourth place in England is very tight so let’s see what will happen in the future at the end of the season.

“It’s his second season here and he will still have three years on his contract until the end. Let’s see. He’s someone who loves to know a different culture, a different football.

“He sees a way to have a career playing in different countries because he would like to win some trophies and prove himself and say to his children ‘I won there and I won there’ and ‘I was a very good player in all the top championships’ so let’s see, the future is really very open but, at the moment, we don’t discuss about that because really the season is in a big moment.”

That really doesn’t fill us with a lot of confidence that Lukaku will be at United next season. The rise of Marcus Rashford under Ole Gunnar Solskjaer has probably put his nose out of place, but it should drive him on to work harder.

It has been a difficult campaign for Lukaku, though he has improved since Solskajer came in as well as shred some of the muscle he gained for last year’s World Cup.

“He likes Italy,” Pastorello continued. “When he was a child he followed a lot the Italian league. Everybody agrees today the Premier League is the best but years ago Italy was the best and they were the dreams for the younger footballer players.

“Teams like Real Madrid and Barcelona, of course, attract any champion so he sees also in La Liga one day. Bundesliga for sure is a very good championship.”

If Lukaku doesn’t want to be at United and finds himself dreamy over every other top club in European football, he should leave in the summer. United should be able to get a good deal for the striker and his sale should prompt a move for a better striker.

There are plenty of options out there and United also have Rashford going through the key stages of his development as a senior player. The England international must now become a 20+ goal per season striker, otherwise, Solskjaer will need to find someone else.

Interestingly, Pastorello insists his client is enjoying life under Solskjaer, but then why does he feel the need to flirt with more than one club before the transfer window opens?

He added: “In this period what he appreciates a lot about the manager is he was keeping him involved with a lot of attention.

“That is normal with the level of the player but sometimes managers are not so used to doing it anyway.

“He was amazing in the victory against Paris Saint-Germain so now we think he’s back on his place.”

Lukaku is not the only United player with an uncertain future. Paul Pogba is forever being linked with Real Madrid, David de Gea’s contract expires next year and there are several others on the brink of leaving Old Trafford.

At this stage, we’ll be lucky to field a team next season.