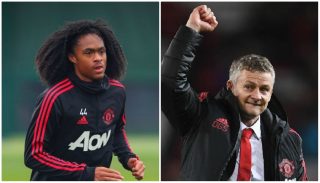 Manchester United starlet Tahith Chong has been given a taste of first team action this season, but the Dutch kid does not consider himself a first-teamer just yet.

Chong made his first-team debut with United in January as a second-half substitute against Reading in the FA Cup.

NEXT: Lukaku representative hints star could leave Man Utd to play in Serie A, La Liga and Bundesliga

He has come out in support of his manager, Ole Gunnar Solskjaer, for investing time in youth.

“It was just a proud moment making my debut against Reading,” Chong told the official Manchester United website.“For me and everyone, in and around the club. We won the game as well, which was good. The hard work eventually pays off, which is good to see.

“I think, ever since the manager came in, he has given me my debut and others have had theirs too. I think nine players have come through the Academy have now appeared under him now so it’s amazing to see the truth both him and the club are willing to put in youth.”

While former manager José Mourinho gets criticised for not showing faith in youngsters by preferring to spend millions in the transfer market, the Portuguese tactician did allow Scott McTominay to burst onto the scene and he’s also been playing well of late under Solskjaer.

Not all of the talented players that come through United’s youth system will become first team players, but it’s always a good sign where there’s a number of potential options breaking through.

Chong is one that excites United fans and it’s getting to the stage that playing youth football is beginning to look too easy for the kid. That said, the jump from U23s to first-team football is massive. Solskjaer will take caution before throwing any youth players into the team.

Aged 19, Chong, who seems a humble sort, is hesitant to consider himself a first team player: “Being at Manchester United, you have so many new experiences and are learning every day. You’re seeing how players go into games and how they prepare.

“I think it’s not specifics really, just small stuff you pick up and put that in your back pocket to use it one day. I think it’s both on and off the field, you go to train with them and see things and think: ‘Hey, okay, I might start doing that as what he did there was really good.”

This sends a message out to other youth players at United, to never give up and keep fighting.

Solskjaer is clearly keen to give these young players a chance but they must take it with two hands.

Chong has a bright future but this is a key developmental stage. Can he make the big step and become a Manchester United first-teamer?