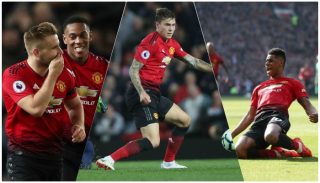 Manchester United’s season has been hit and miss. José Mourinho got sacked in December only to be replaced by Ole Gunnar Solskjaer, who has done brilliantly to get the best out of several players.

We asked several of our writers at Stretty News to cast their vote for who should win Manchester United Player of The Season. If you agree or disagree with any of the arguments put forward, share your thoughts with us on Twitter or Facebook.

Before the season began, everyone wanted Luke Shaw to finally get himself together and make the left-back position his own. He prepared better than ever, rearranging his diet and workout plan, and eventually became United’s best full-back. There is no longer uncertainty surrounding Shaw and he’s been consistent all season, hence why I’d give reward him with the Player of The Year award. Next season I expect him to kick on again.

My nomination for Player of the Year is Marcus Rashford. He hasn’t always shone this season, no, but Rashford spent half of it playing either out of position or second fiddle to Romelu Lukaku but has given nothing but 100% every time he plays. He enjoyed a real resurgence when Solskjaer first took charge and really hit a purple patch, and his commitment to the cause was really summed up during the Liverpool game where he struggled through an injury that has now taken its toll on him. This season has seen him begin to come of age, and I can’t see any better catalyst for the future and his continuing development than an accolade of this magnitude.

We shouldn’t be surprised by the way he has performed this year. He began to string a series of impressive displays towards the back end of the season last year. A back-to-the wall showing against Germany in the World Cup exemplified this. Yet one erratic result away to Brighton and he should be binned. Nonsense. Without too much fanfare, he has become the leader of the back-line. Not just a back-up. Ronaldo can attest to his work in the Allianz Arena. The key target should be to secure him a partner to complement him best. Look out forwards. The Iceman cometh.

For me, it is Luke Shaw. As we all hoped he one day would, this lad has made the Manchester United left-back spot his own exclusive territory. A figure of consistency and calm, Shaw has won three Player of the Month awards and I struggle to think of an occasion where he has had a bad game or not performed. His troubles at United have been well documented having battled both form and fitness, but it has been a pleasure to see Shaw grow and develop into one of the finest, classiest full-backs in the land. Kudos, Luke!

Victor Lindelof endured an incredibly difficult first campaign in England, epitomised by leaving Huddersfield’s stadium under a tied up hoodie after the embarrassment of a game-changing mistake. His transformation from a timid, nervous rabbit in the headlights to a man whose game and character is quickly growing has been a sure positive in a season rife with equal ups and downs. In a season where few have staked a claim to be United’s answer to their centre-back spot long term, Lindelof has become a mainstay with his composure, belief and finding his voice at the back endearingly giving him the unmistakeable nickname of ‘ice man’.

Luke Shaw and Marcus Rashford have had fantastic seasons, but from an uncertain to very much certain future, Victor Lindelof gets my vote as United’s player of the season for 2018-19.