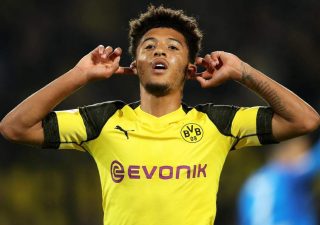 NEXT: Man Utd starlet heaps praise on Solskjaer for faith in youth

In an interview with Goal and DAZN, the BVB suit said: “I don’t care about that [rumours]. Everybody knows that Jadon will play for us next year. That’s a fact and we don’t have a price tag for him. And because everybody in Europe knows that nobody contacted us.”

This dismissive tone strikes us as odd because United haven’t been shy about briefing their interest in Sancho to several media outlets. The Independent recently claimed that United would make Sancho their prime target this summer.

The Reds are lacking a specialist winger on the right, with most our attacks predictably coming from the left. United will be more potent going forward if Ole Gunnar Solskjaer can find a way to improve the right flank ahead of next season.

It’s no wonder they see Sancho as the ideal fit.

The England international is 19-years-old and taking the Bundesliga by storm. He fits the age profile, has the ability to become a real star and already has goals and assists to his game.

Watzke elaborated on whether Manchester City, where BVB signed him from in 2017, have first refusal on the player: “We never give information about contract details but City has no co-determination at all.”

BVB are currently two points clear on top of the Bundesliga with Bayern Munich just two points behind.