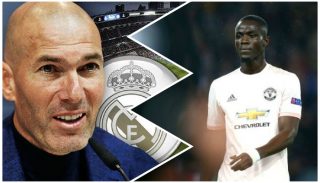 Not quite good enough to start for Manchester United, but Zinedine Zidane is reportedly keen on sealing a surprise transfer swoop for Eric Bailly.

The Ivory Coast international had a promising debut campaign at Old Trafford in 2016/17, winning the Europa League and League Cup, but he fell out of favour with José Mourinho the following season and has struggled to break back into the team ever since.

Bailly has not seen his fortune change since Ole Gunnar Solskjaer replaced Mourinho, and a report from The Telegraph this week hinted that United may listen to offers for the former Villarreal defender this summer.

NEXT: Solskjaer may face battle with Man Utd board to ensure right structure is in place

While it wouldn’t be that big of a surprise if United let Bailly go this summer, interest from Real Madrid is certainly a shock. Are they foolish enough to include Raphael Varane in any deal?

The Sun claims Zidane is a big fan of the £35 million-rated defender and Madrid is now a possible destination should he leave Manchester.

It remains to be seen whether this report has any truth in it, but we’re raising questions already. Why Bailly and not someone, err, better?

The 24-year-old may just need a fresh start somewhere. He’s also used to Spanish football and would settle quickly. Then it would be a matter of how long before he gets injured again…