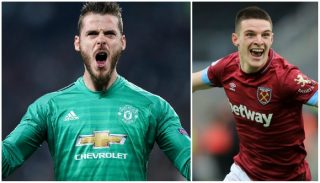 So, there we have it. What seems like a briefing from a club member of significance, with several newspapers running the same lines in their reports last night.

Some include differences, like these two reports: The Guardian & The Telegraph.

They both claim that Manchester United will spend big this summer, a squad overhaul even, but the latter is a stronger report and it outlines that the Reds are not searching for a new goalkeeper, despite talks with David de Gea and his representatives dragging on.

It is believed that De Gea’s camp wants more money than what’s being offered when United are already prepared to make him the world’s highest-paid keeper. The Spaniard’s stance is strengthened by the fact his contract expires next year, but he hasn’t been anywhere near his best this season.

Anyone that watches United regularly will tell you they need to sign a world-class centre-back in the summer. Or that they should have done so a year ago!

James Ducker of The Telegraph also states that United are considering a move for Crystal Palace right-back Aaron Wan-Bissaka. He could be joined at the club this summer by fellow England starlet Jadon Sancho, who is attracting significant interest from Old Trafford.

But can United expect to sign their main targets if they don’t secure a Champions League spot? Sancho, as an example, may not want to play Europa League next season after just launching himself on the biggest stage.

The plan for the summer, as outlined in our preferred piece of the two, Ducker claims United will operate on “the loose basis of three signings and three departures” during the upcoming window. More arrivals expected only if Ole Gunnar Solskjaer can trim the squad further, with 8 potential exits on the cards.

Juan Mata and Ander Herrera could see their contracts expires at the end of the season, Matteo Darmian and Marcos Rojo rarely play and have been linked with leaving before, while Antonio Valencia will certainly not be offered a new deal.
Ivory Coast international Eric Bailly could also see his time at United come to an end. Under Solskjaer, he has failed to make any impact, proving it wasn’t just José Mourinho who didn’t fancy him regardless of an impressive debut campaign at the club in 2016/17.
While the story briefly mentions Declan Rice and Callum Hudson-Odoi, you have to wonder if Solskjaer is looking at this young English side trying to map out the best players for the future.
After all, Sir Alex Ferguson had an English core to most of his teams.
There is also some insight into Alexis Sanchez’s future at the club. Unless the club and player can come to come sort of compromise, we might be stuck with the Chile international for another three years.
Imagine that…