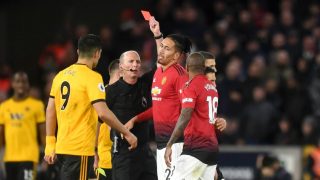 Another woeful performance but this one ended in a loss.

Three defeats out of four and a Champions League place looks a lot more difficult than it did a month ago.

All of Ole Gunnar Solskjaer’s good work is being wasted and the same problems persist.

There is only so far you can take a group of players that are clearly outstaying their welcome.

Pointing the finger at the usual suspects is futile. United fans have made their mind up about Chris Smalling, Phil Jones and Ashley Young.

This summer The Reds really need to address their part in the squad. Solskjaer’s hands were tied against Wolves with injuries ravaging the squad once again.

Mata,  Martial and Matic were dropped to the bench from the weekend. Rashford and Herrera were not fit enough to travel.

Just looking at the starting eleven you can see the depth of this group isn’t good enough and I think the boss knows.

There has to be a tipping point and United have been going through tremendous highs under Ole.

The lows recently have harked back to previous management but this time we do create clear cut chances.

At 0-0, Romelu Lukaku really should have done better with his header from a pinpoint cross for Diogo Dalot.

Jesse Lingard’s header at 1-0 would have changed the game we got dramatically but it wasn’t to be. A tame effort followed by a tame performance.

It was reminiscent of the game at The Emirates when Lukaku missed a sitter in the early exchanges and another effort when it was 1-0 early in the second half.

These opportunities were not half chances they were guilt edged and changed the course of the results.

With these players, we are going to get the same results.

After we conceded we lost all shape and provided little threat.

United’s best player Scott McTomiany nearly doubled his and the Reds goal tally but that was it.

McTomiany looked a far more confident player Tuesday night and he played his role with a lot of positive play. Being the best of a bad bunch is not high praise but it’s a step in the right direction. The Scottish International played an important role in that famous night in Paris and he could benefit the most from the latest injury crisis.

His partner Fred had a promising start but his slip for the first goal proved costly. David de Gea didn’t really do him any favours with the pass through. The Brazilian battled through the game but it isn’t happening for him right now.

Hearing Paul Pogba talk about Real Madrid is maddening in itself but while he is so out of form it is doubly infuriating.

So often the conductor of United’s best displays under Ole he has yet to find the freedom in his play he once had. Giving the ball away needlessly so often we really expect more from our talisman.

Our Norwegian boss is going to have to ride these performances and results out with a squad he took on.

Too many players are reverting to type and it’s a problem that has once and for all need to be addressed. New contracts for Young, Jones and Smalling won’t help his cause but a big investment defensively is an all too obvious task.

Calamity is never too far away from our back line and Wolves’ second goal summed up our night.

Up next? Just the small matter of Barcelona.

In the Champions League home tie to PSG, United had a decent first half but were outclassed in the second.

Our quarter-final opponents, Barcelona, will not afford us that luxury. If Wolves can capitalise on our mistakes what do you think Barca are capable of?