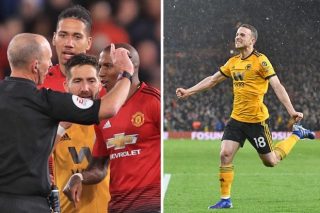 Manchester United suffered a setback in their fight for a top four finish on Tuesday night after being beaten 2-1 by Wolves.

Next up in the league for United is West Ham, and we’ll be without both Ashley Young and Luke Shaw due to suspension.

Last night’s result gave advantage to Arsenal and Spurs in the race for top four. Anything can happen between now and the end of the season, but United must win all of their remaining league fixtures.

It’s been proven on a number of occasions that many of the current squad are not up to the job. Jose Mourinho’s comments regarding defensive cover has come back to haunt us yet again. Shaw has come on in leaps and bounds and he was probably the one player who supporters could point as showing effort and work-rate. Traits previously not attributed to him. Victor Lindelof has been missing recently due to the birth of his child recently. He struggled this evening, but generally has been measured and composed in tackling and positioning. Diego Dalot is certainly one for the future. Whether this is at right back or playing further forward.

Sadly, that is all you can possibly award credit to in our back-line. Young was caught too deep for the equaliser and stupidly gave away a number of fouls before his eventual sending off. And it was the first time his positional sense has left us in danger. Other times, we were fortunate enough to score enough to get the necessary points. Having a 34-year-old converted winger playing as first choice right back, is still ludicrous to me.

The presence of Chris Smalling or Philip Jones in the team always wakes me up in the middle of the night in a cold sweat. Having both together means that the most inept of attackers can suddenly fancy their chances. As proven tonight with their collective botch for the winner. Mateo Darmian seems to be the most petrified Italian when it comes to a winger approaching him. Eric Bailly is a potential beast, like Marcus Rojo, if either of them could make a rational decision. Antonio Valencia is just winding down the time until he leaves. Not a great cast of characters really.

Until proper solid defenders join this club, any hope of progress are built on shallow soil and doomed to wither and die.

Not standing up when counted

Like it or not, Paul, but you are our most expensive player in history. To expect you to win every game single-handedly is perhaps unfair. Not every game can you possibly crack one or two in from thirty yards, lay-off assists on a sixpence or leave those snapping at your heels trailing in your wake as you steam forward yet again. We can expect a little fucking effort though. The past few weeks have featured nothing but links to Pobga’s imminent link-up with Zidane and all at Real Madrid. Coy gesturing will not make tonight’s display any less bitter. A few great passes on show in the early period when United were in charge but after that, very little. Too many instances featured him running the ball into blind alleys and being crowded out of it. The lack of control we had in the midfield was startling after that initial bright spell. Any outlet was left wanting and hit-and-hope long balls seemed to be the primary outlet.

Pogba is, of course, not the only culprit. Jessie Lingard seemed to vanish from the game after his early miss and led to Lukaku being utterly isolated up front, Fred was being picked off constantly including the one for their first and amazed many that he lasted the entire game. During such times, fans need a player to grab the game by the scruff of the neck and make something happen. Pick other team-mates off the ground and instil the fear of whatever god into them. It did not happen tonight and it has not happened on quite a number of games. Quit making dove eyes towards Spain. The Madrid fans would have the hankies out immediately after such a display.

The absence of Ander Herrera was put down to that of an ankle injury. Nothing to do with frustration at stalled talks and the rumoured move to Paris Saint-Germain. Nothing at all.

Discussions seem to have gotten no further with the future of David de Gea, Marcus Rashford and Anthony Martial. Desire from the Spanish capital for our goalkeeper is not some idle tattle in the online columns. Only for a dodgy fax, he would be playing in white right now. As such events drag on, one would not blame him for deciding to make that switch back to his homeland. Fans may comment about various mistakes he has committed in recent games and over the past year. Even the very best will make an error occasionally. Particularly, when in front of our back four at times. Given a choice between him with us or facing us, there can only be one option.

Some have commented regarding the swollen wage bill received by Alexis Sanchez every week for currently doing sod all. It is natural that team-mates are possibly angered by this too. Having him bugger off to Italy, Spain or China would free up a huge chunk to reward players who deserve it. And integral members of the future and identity of the club. When a director of football should be sorting out all of these details, and setting out targets to sign, we are instead leaving it in the hands of Woodward. Letting it until we possibly secure a champions league place to decide on these deals is fatal. Players may have their minds decided by then. And based on tonight, our place there is nowhere near guaranteed.