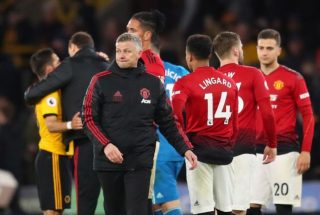 Wolves have become a bit of a bogey team for Manchester United.

Not only are they the reason we are no longer in the FA Cup, but Wolves also beat United at Molineux last night to put a dent in our top four hopes.

When the two sides met at Old Trafford earlier this season, the match ended as a 1-1 draw, so United have been unable to beat the newly promoted Premier League side.

A win last night would have put United above Tottenham and Arsenal in the league, moving from fifth to third place.

Can’t miss chances like that when you’re not that good, same as against Arsenal. Wolves are a good team and a bad match-up, United lack killers and a bit of class.

However, Chelsea can move into fifth tonight with a win over Brighton, possibly pushing the Reds further down the table.

After losing 2-1 at Wolves, Solskjaer was asked what United need to do between now and the end of the season to finish in the top four.

“We don’t have any room for losses,” Solskjaer said, as per Bleacher Report. “We are a very good team so it will be difficult for those who play against us and this performance deserved a win.

“There are many things we have to improve because Barcelona are a top side but we will use one or two days now to analyse and recover.”

"We need 15 points from our final six games" 🧐 Ole Gunnar Solskjaer concedes @manchesterunited cannot afford any more slip-ups if they are to finish in the top four 😤🙏 . . . . .#manchesterunited #football #solskjaer #mufc #premierleague 🔴