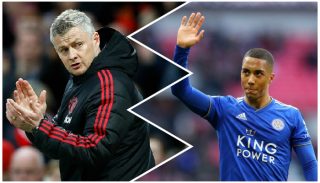 Manchester United will be looking to strengthen key areas of the team in the summer, with Ole Gunnar Solskjaer set to leave his mark on the team.

The club must back the new manager in the transfer market to ensure we have the best chance possible of having a successful campaign. It’s been far too long since we’ve seen United challenge for the Premier League title and Solskjaer will be aiming to deliver silverware in his first full season in charge.

One area at United that needs to improve is the midfield. Not only is it lacking in numbers following the sale of Marouane Fellaini in January, but the standard of players available to Solskjaer in this department is worrying, to say the least.

NEXT: Three observations from Man Utd’s 2-1 defeat at Wolves

Paul Pogba at his best walks into the team, but how long will he put off his inevitable transfer to Real Madrid? Nemanja Matic’s best days are behind him and Ander Herrera is rumoured to have agreed on a pre-contract with Paris Saint-Germain, on a Bosman.

That means a midfielder or two should be on United’s transfer wishlist this summer and a report from HLN in Belgium claims Monaco’s Youri Tielemans, currently on loan at Leicester City, is on the club’s radar, as cited by the Leicester Mercury.

The report also claims that The Foxes plan to offer Tielemans a permanent contract on the back of his half-season long loan.

Solskjaer is said to like the player and may be willing to spend £40 million on him this summer.

If that’s the profile of player we’re going for this summer, I am very for it.

As noted above, United have also been linked with Atletico Madrid midfielder Thomas Partey, who reportedly has a £50 million release clause, as per CitiNewsRoom.

United’s recruitment must improve and they’re looking to appoint a technical director before the start of next season, with three candiates in the running.

Leicester manager Brendan Rodgers recently said Tieleman is a player he wants to continue working with, as quoted by the Daily Mail.