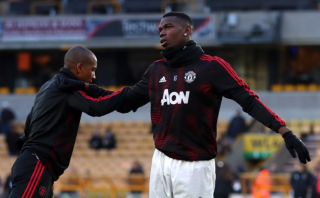 At fault for both goals as he failed to react to Jota’s opener and then seemed to be stuck in treacle for the comedic winner. Poor. His head is not right at present.

Given a torrid time by Diogo Jota, lost the ball constantly and deservedly sent off after a terrible night at the office. A clumsy liability – worst United captain in living memory? His new contract makes a mockery of the club.

Having had a shocker in the FA Cup game, Lindelof was improved here on the left of what was at times a back three. Didn’t do much wrong and was quietly solid.

Guilty of indecision for the goal and another poor night summed up with a slapstick chuckle brothers own goal. Will be sick of the sight of the talented Jota.

Picked up a needless booking which means he will be banned for United’s next two league games. Shaw looked a constant threat down the left and was at the heart of most of our best moments.

Had not been seen in Red since his coming-of-age night in Paris but another impressive showing. Scored his first United goal with an excellent finish in a performance of steel and style. Kept us ticking with some lovely runs. Did well.

Just not good or strong enough. Shrugged off the ball too easily and at fault for playing United into trouble for Jota’s goal. Flattered to deceive again in what has been an underwhelming debut season at Old Trafford.

In a deeper role than usual, Pogba didn’t do much and was again outshone by Wolves metronomic midfielders Neves and Joao Moutinho. The world-class player of Ole’s early tenure was once more conspicuous by his absence. Almost anonymous.

Started well in an advanced position but faded to the fringes as Wolves got hold of the game. Booked and got taken off.

Did OK. Had two good first half chances on his return to the team. Despite looking an occasional threat, he drifted in and out of the game.

Started well, involved in the goal and should have made it 2-0. Tried to press but did so in vain and became anonymous.

Calamity Jones. It is baffling how he’s still a Manchester United player. Brought on to help shore up the defence but instead ending up costing the game by assisting the own goal.