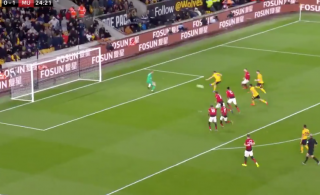 The Reds failed to hang onto their lead over Wolves on Tuesday night, with Diogo Jota scoring an equaliser after a mistake from Fred.

Scott McTominay scored a lovely strike from outside the box to hand Manchester United the lead, though it was wiped out soon after.

United dominated for the first 20 minutes or so, but are now struggling to keep the ball in the final third. Wolves, who couldn’t cope with the Reds early on, have woke up and grown into the game.

While the goal came against the run of play, to say it was avoidable would be an understatement.

David de Gea plays a pass to Fred, who has his back turned against the ball, leaving him in a difficult position to take control with Wolves pressing high up the pitch.

That said, Fred really needs to do better on the ball and at least face the ball, anticipating it each time. It wasn’t the touch of a £50m+ midfielder.

Jota then made a clever run in behind and scored for the hosts.

Wolves are back on level terms as Jota capitalises on Fred’s poor touch!

United have to do it all again if they’re to clinch three points tonight. We still have the top four to play for!