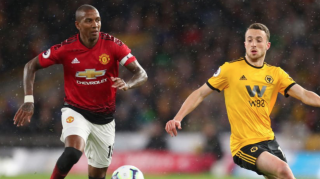 Ashley Young had a mare against Wolves tonight.

Not only was he sent off, the England international looked lost in Manchester United’s back three.

Young was partnered by Victor Lindelof and Chris Smalling but never appeared assured in the position.

Ole Gunnar Solskjaer got his tactics spot on in the first 20 minutes. United were one up and could have scored three, but allowed Wolves into the game.

It’s currently 2-1 and United are down to 10 men. You could say it’s a huge blow to our top four hopes.

And, we can’t really argue with the sending off. His challenge for the second yellow card was high and reckless, even if contact was made with the ball.

A number of United fans reacted to Young’s poor display after his second yellow card. He now misses our league fixture against West Ham, along with Luke Shaw who picked up with 10th Premier League yellow card of the season tonight.

He should never play for this club again what a disgrace.

What a shite player

How did he get the armband?

That should be Ashley Young’s last involvement as a regular first team player. A stand out liability out there today and I’m trying to say that nicely.

Ole when he sees Ashley Young in the dressing room at FT. pic.twitter.com/7uCuTA6qdJ

I’ll hold my hands up and say I was completely wrong about Ashley Young deserving a one year extension, a winger by trade not a natural full back like Valencia, he cannot be a starter next season, he’s simply not good enough.