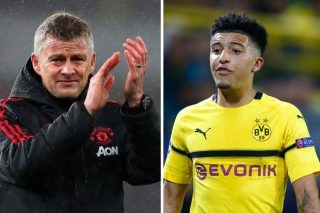 While Real Madrid and Paris Saint-Germain are reportedly interested in signing Borussia Dortmund’s Jadon Sancho, The Independent’s Miguel Delaney and Jack Pitt-Brooke claim a move to Manchester United is most likely for the 19-year-old.

United need to sign a right winger and it’s no surprise that they like the look of Sancho following his remarkable breakthrough season in the Bundesliga. Too much of our play tends to come down the left and it would benefit us massively going forward to add potency to the opposite flank.

It could be said that United haven’t had a proper right winger since Luis Nani left the club for Fenerbahce in 2015. The Potuguese star currently plays for Orlando City.

However, Sancho looks the real deal after becoming integral to BVB’s title challenge this season, as well as breaking into Gareth Southgate’s England side. There’s great excitement surrounding the Three Lions camp now, with so many quality English players coming through on the back of a decent World Cup campaign, reaching the quarter-finals.

According to The Independent, Sancho has convinced United to make him their top target in the summer window, knowing he would cost £100 million before add-ons if he were sold.

Solskjaer has an age profile for his targets and Sancho, we believe, fits that. He would bring more pace to United’s attack, while his goals and assists (9 & 14, as per WhoScored) tally across all competitions this season is encouraging.

No one in Europe’s top five leagues has more assists than @Sanchooo10 🔥🔥🔥 pic.twitter.com/cUBjp7JR52

The report adds that “Sancho himself is not desperate to leave Dortmund, but he is keen to play at the highest level possible.”