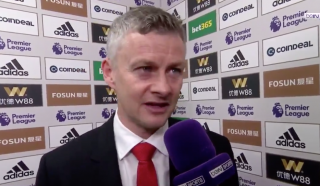 When Ole Gunnar Solskjaer faced up to the cameras after United’s 2-1 defeat at Wolves, he did not carry the look of a man who had sent the proverbial china flying into the dressing room stratosphere.

Maintaining his positive demeanour, he calmly analysed the game in the face of some at times awkward questioning. It’s all too easy to rant and rave at players after a defeat and it would have been easier for some managers to rip into the reporter. It makes you wonder if Ole is too nice?

Sometimes constructive criticism is needed but Solskjaer, the anti-Jose Mourinho, is all smiles.

Tonight’s result puts a dent in United’s top four hopes. In order to qualify for the Champions League next season, we must now win all remaining games with six cup finals to come. Despite a third defeat in four games, Solskjaer said he would not criticise his side after he what he described as a good performance in the most part at Molineux.

His interviews are getting repetitive now – not on his part, but on the part of lazy journalists consistently trotting out the same line about Solskjaer not having faced a test. He was asked that again with Barcelona next up at home in the Champions League. He’s now faced every top team in the league bar City – winning at Chelsea, Arsenal and Spurs in the league plus a draw with Liverpool at Old Trafford and THAT night in Paris. What more does he have to do before this question stops getting asked?

It’s a commonly used dig to expose the affable Norwegian’s lack of experience at the top level but we find it overplayed.

In typical Solskjaer style, he was put on the spot but kept his head.