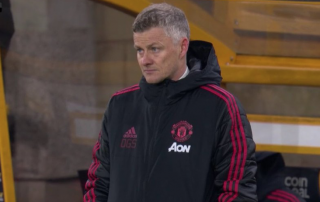 A disappointing night ends with Manchester United suffering their third defeat in four games across all competitions after losing to Wolves in the Premier League.

The result puts a big dent in United’s hopes of finishing in the top four, now possibly meaning we need to win all of our remaining league fixtures.

While that was the aim anyway, it’s now considered a must with Champions League football next season on the line.

NEXT: Solskjaer: ‘I’m not going to shout anything daft when my boys have played well’

On the back of a win over Watford, United arguably played better tonight but individual errors cost the Reds. They were unable to build on Saturday’s victory, failing to get revenge after their FA Cup defeat to Wolves prior to the international break.

It means our impressive 78-game Premier League unbeaten run when scoring first came to an end tonight. According to Sky Sports Statto, as seen in the tweet below, we’ve not been beaten after opening the scoring in the league since Swansea away in 2015.

Before tonight’s defeat v Wolves, they hadn’t been beaten when opening the scoring in PL since at Swansea in Aug 2015 pic.twitter.com/bVzyQwOE7x

United are back in action next week for the first leg of their Champions League quarter-final against Barcelona. Ideally, we’ll score first and hold onto the lead.