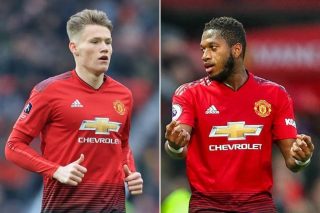 Ole Gunnar Solskjaer has named his starting eleven to face Wolves in the Premier League tonight.

As expected, it’s David de Gea between the sticks with Victor Lindelof returning to the defence after some time off to partner Chris Smalling. Luke Shaw keeps his place at left-back with Ashley Young on the opposite flank.

The midfield sees two changes from the win over Watford. While Paul Pogba keeps his place, he is partnered in the middle by Scott McTominay and Fred. Ander Herrera, who is being linked with a Bosman move to PSG, doesn’t even make the bench.

Another inclusion is Diogo Dalot, who will likely provide width on the right and help Young out defensively.

As for absentees, Marcus Rashford misses out due to illness, as reported by ESPN’s Rob Dawson before the team was announced. We can only hope it’s nothing serious and that he gets time to recover before United take on Barcelona in the Champions League next week.

Marcus Rashford not with the United squad that has arrived at Molineux. Won’t play because of illness.

The Reds have some tricky fixtures coming up and Wolves are no pushovers, as they showed when knocking United out of the FA Cup quarter-final stages, but tonight should be considered a must-win for our top four hopes.

If Spurs continue to flop and Arsenal do what they usually do, we stand a really good chance of finishing not just fourth but third. That’s incredible when you look back to our chances in December when Solskjaer took over.