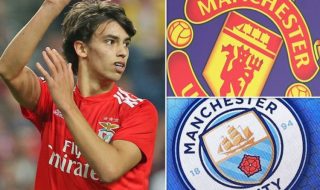 The transfer window opens soon and we’d all like to think Manchester United are progressing well with identifying targets and figuring out their availability this summer.

One player the Reds have been linked with regularly over previous months is Benfica starlet Joao Felix. The Portuguese wonderkid has had a superb breakthrough season and is likely to attract interest from several top clubs as a result.

The latest on Felix has been flagged by our friends at Sport Witness, who have translated a report from the print edition of Portuguese newspaper Record. They claim United are in talks over a transfer for the teenager with an £85 million release clause.

It is also noted that United and Manchester City will both have scouts at the Lisbon derby on Wednesday.

NEXT: Man Utd face competition for €60m Juve star, but is Douglas Costa the right man for Ole?

Every club has a right demand the best deal possible when it comes to losing a star player. Benfica obviously holds Felix in high regard and want him to stay at the club beyond this season, but know that could be tricky with the youngster’s popularity rising.

It also suggests that United must be ahead of the other clubs linked with moves for Felix if talks are taking place.