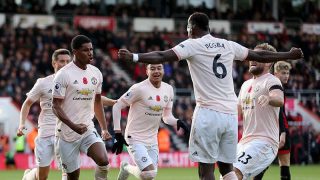 Manchester United are without Marcus Rashford and Ander Herrera for tonight’s Premier League meeting against Wolves.

Anthony Martial is on the bench after recently suffering a knock, so Ole Gunnar Solskjaer has opted to play Diogo Dalot and Jesse Lingard on the flanks.

In a must-win game, it’s crucial that the changes made by Solskjaer can freshen up the midfield after a lacklustre display at the weekend versus Watford.

READ MORE: Man Utd starting XI vs Wolves – Fred and McTominay back in midfield, star ruled out with illness

Only Paul Pogba keeps his place in midfield from Saturday’s trio. Nemanja Matic has been benched for Scott McTominay and Fred replaces Herrera, who has suffered fitness issues.

Ole Gunnar Solskjaer confirms Ander Herrera’s absence is fitness-related. Anthony Martial starts on the #MUFC bench due to a knock

There are mixed up reports surrounding Rashford. Some claim he left the squad with an illness, while Simon Peach claims another ankle injury is the reason he won’t feature.

Hopefully, Rashford’s injury isn’t serious and Herrera is genuinely having fitness issues. The latter has been linked with a Bosman move to PSG and it would be disappointing to hear his head has been turned ahead of a potential summer switch.