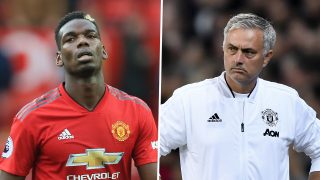 According to Record, the former Manchester United manager was referring to the France international indirectly as he revealed an anecdote about the way the player snubbed him and his teammates after a match.

“I had a Manchester United player [supposedly Pogba] who wanted to leave the stadium after a game in his new Rolls Royce and not the coach of the team,” Mourinho said.

This doesn’t paint Pogba in the best of lights, but it’s pretty bold of Record in Portugal to claim Mourinho indirectly aimed his dig at the Frenchman.

He doesn’t say Pogba’s name and could have been on about any of the players he worked with at United.

Of course, the pair had their disagreements at Carrington and the relationship continued to worsen. It was only a matter of time before one left.

Mourinho was sacked by the club in December after terrible results. Ole Gunnar Solskjaer immediately came in as caretaker manager and has done enough since then to warrant the job on a permanent basis.

It may well be a dig at Pogba, but Mourinho did not single out any United player in his comments.