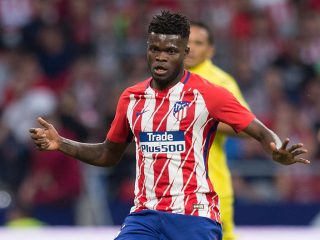 The likelihood of Ander Herrera leaving Manchester United for Paris Saint-Germain has put several midfielders in the gossip columns.

According to CitiNewsRoom, the Ghana international is on Ole Gunnar Solskjaer’s list of summer targets, and his desire for a deal is shared. The report states that he has a €50 million release clause in his existing contract.

Partey, 25, is a defensive midfielder and the story claims he would be keen to make a move to England in the summer, amid interest from United.

YouTube personality Mark Goldbridge claims to be a fan of Partey and thinks the Ghanaian would be a fine addition for United.

If Herrera goes then Thomas Partey would be an amazing signing for United. Box to box, CDM, the lad can do the lot. Atletico are a bloody nightmare to deal with though and Simeone has already said he’s none transferable

While it’s useful to know this when we could lose Herrera on a Bosman, he isn’t a similar player to the Spaniard but has plenty of energy which is an attribute United lack in the middle whenever the former Athletic Bilbao man is absent.

United could be without Herrera permanently soon, with the Daily Record reporting that the 29-year-old has agreed on a deal with PSG.

Let’s how if we do sign Partey from Atletico Madrid, he has more of an impact next season than Fred so far…