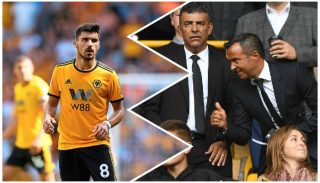 We caught up with Wolves fan and writer Ryan Plant ahead of Manchester United’s trip to Molineux.

It’s always good to get some insight on the opposition and Ryan does that well below, but we’re hoping to see some sort of sweet revenge over Wolves tomorrow night.

Nuno Espirito Santo’s men knocked United out of the FA Cup this season in the quarter-final stages. It came as a huge blow as it was our only realistic chance of winning silverware this season.

Match Preview: Man Utd to get a modicum of revenge against Wolves

Now our attention is on finishing in the top four and securing a place in next season’s Champions League. United go into this game on the back of a 2-1 win over Watford but they’ll need to play better against Wolves.

Sit back, grab a cuppa and enjoy our exchange with Ryan. You can check out his portfolio of work on Wakelet.

The FA Cup semi-final defeat hurt but it didn’t help that our players seem exhausted. Wolves, as a newly promoted side, have had a terrific season whatever happens in the latter stages of the club, but do you feel there are enough momentum and quality in the side to win the FA Cup outright?

Wolves’ team is full of quality – certainly more than the last season they had in the Premier League, back in 2011-12! And there is certainly momentum in the side, after a bad run of results before Christmas which included losses to Huddersfield and Cardiff. Wolves have only lost three times in 2019.

Nuno Esprito Santo has always used a small squad during his time at Wolves. It was bloated when he arrived, but he soon cut it down. Whilst it’s good for cohesion and building momentum if a key player was to get injured or suspended Wolves would struggle. For example, Raul Jimenez is the only senior striker at the club, and he is only on loan (albeit likely to sign permanently in the summer). I made my feelings about a largely inactive January transfer window clear, but Nuno has proven me wrong so far.

What do you put this season’s success down to?

Wolves play excellent football, which is usually cited as a reason for the great season so far, but I think it comes down to bravery. Some teams in the Premier League simply wait to get beaten, which Wolves under Nuno have not and will never do. Mick McCarthy was infamous for picking and choosing which games he’d try to win at Wolves, including making ten changes against United so that the team would be fresh for a game against Burnley, but Nuno would never think in that way.

Sometimes it doesn’t work – they lost 3-0 to Manchester City – but it’s no coincidence that there have been wins against Chelsea and Tottenham Hotspur, and draws against both Manchester clubs, Arsenal and Chelsea.

Jorge Mendes has an undoubted affiliation with Wolves. How do Wolves fans see his influence at the club long-term when it could be abused to park clients in the Premier League to gain exposure for potential transfers down the line?

Jorge Mendes has been a huge help at Wolves, make no mistake, but, through design, indolence or irrationality, his influence has been overstated. Wolves’ owners, the Fosun International group, are business partners of Mendes. He doesn’t work for Wolves and doesn’t get involved on a day-to-day basis.

Without him, Rui Patricio, Joao Moutinho and Ruben Neves wouldn’t be at Wolves, you’d imagine, and every Wolves fan knows that. Every rational fan also knows that there will be a time when it’s a key Wolves player moving on, and not a star player coming to Molineux. That’s football, it happens, and a club of Wolves’ current standing must accept players move on to bigger and better things. However, it’s important to remember that, if he wants a powerful business like Fosun to continue to partner with him, he can’t be stitching Wolves up.

Also, lots of people pretend, through jealousy perhaps, that Mendes’ players are available exclusively to Wolves. Moutinho cost £5 million having struggled for game time at Monaco, which suggests to me that some clubs thought he was finished. If elite teams did want him, he’d surely have gone, Mendes cannot force anyone into any move.

We’ve been linked with Ruben Neves since last season and he’s a player who will certainly attract interest this summer. Will Wolves be able to keep hold of him?

Wolves fans know that Ruben Neves won’t be at Molineux forever. In fact, he’s made comments about returning to Porto to finish what he started already. It’s modern football, it’d be naive to expect a player of his class to stay at Wolves for an extended period.

However, he is genuinely happy at Wolves. He does lots of interviews, watches the youth teams and is presumed to be the vice-captain behind Conor Coady after Danny Batth left in January. He also has a very young family, which makes me doubt that he will want to up sticks and move again.

Tell us something about Wolves this season you feel has gone under the radar?

Wolves, and particularly Nuno, are not given enough credit. Any post in support of them on social media is met by a barrage of comments about money, Mendes and apparent cheating.

First, Wolves didn’t even spend the most money in the Championship last season, and didn’t experience the Financial Fair Play troubles of Aston Villa, Birmingham City and Derby County. And, few mention that Fulham spent a lot more on transfers ahead of this season than Wolves.

And, there have been investigations into Wolves and how they operate, but nothing came of them. Nothing.

Nuno has been an excellent coach. Walter Zenga and Paul Lambert had a similar backing by Fosun and Mendes, including Silvio, a Europa League winner, but Wolves nearly got relegated to League One.

Nuno rejuvenated the squad. He changed the formation, signed John Ruddy and Ryan Bennett for free from Norwich City, was the first manager to trust Matt Doherty as a regular on the right side, moved Coady from the midfield to his role in the back three, trusted Romain Saiss and has promoted a number of academy graduates, including Morgan Gibbs-White and Niall Ennis amongst others. In short: give Wolves some credit, and look past the clickbait and nonsense about their rise.

Also, the Under-23s are top of their division, the Premier League 2 Division 2, and the academy was of a Category One status before Premier League football was achieved. Again, this doesn’t fit the narrative of Wolves relying on Mendes for success.

Will Wolves make it back-to-back wins over United on Tuesday?

I think Wolves can beat United again. From what I’ve seen under Ole Gunnar Solskjaer, the main reason for the success in recent months has been the form of the midfield, particularly Paul Pogba. However, Moutinho has twice shackled him, Neves has been enjoying some of his best form in a Wolves shirt and I truly think Leander Dendoncker could get into any Premier League side minus City or Liverpool.

The wing-backs are also crucial. In particular, in the FA Cup game, Luke Shaw became extremely isolated, which led to the second goal.

Thanks to Ryan for his answers!