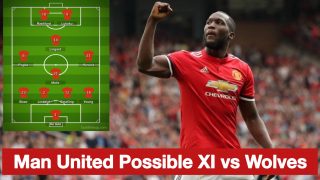 Manchester United take on Wolves in the Premier League on Tuesday night and Ole Gunnar Solskjaer is set to have more players available than he did for Saturday’s win over Watford.

Romelu Lukaku is expected to return from his foot injury, as hinted by Solskjaer at Monday’s press conference, and we expect him to go straight into the starting eleven.

The Reds have dealt well with the number of injuries suffered over the past month or two, but this is the business stage of the season. Games come fast and they’re all considered big ones.

NEXT: Man Utd duo make BBC team of the week after Watford win

This will be United’s last game in preparation for the first leg of the Champions League quarter-final against Barcelona. That may play Solskjaer’s hand in putting Victor Lindelof back into the side after some personal issues, but it very much depends on the Swede’s state of mind after receiving death threats for pulling out of the national squad because his wife was due to give birth.

The midfield will stay the same despite underperforming in their last outing, however, I would consider starting Scott McTominay ahead of Nemanja Matic.

We can’t see Juan Mata starting this one after his performance at the weekend. He was dire, the look of a player past it. That should see Jesse Lingard back in the starting eleven behind a striking duo of Marcus Rashford and Lukaku.

It won’t be easy but United must come out of these games with three points knowing there are more difficult fixtures to come.

Lukaku first goalscorer sounds like a decent shout, no?