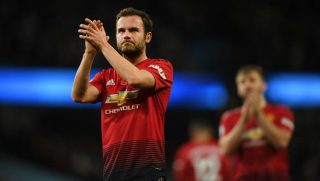 Juan Mata’s future at Manchester United currently hangs in the balance, but the club are considering a position for the talented playmaker when he decides to retire from playing football.

The Spaniard, 30, could leave United on a Bosman this summer unless he and the club come to some sort of agreement over a new deal. Though, time is pushing on without anything to suggest he will get a new deal.

According to the Manchester Evening News, something could be in the works with United keen to involve Mata in some capacity once he calls time on his career.

The MEN also claim that talks over a new deal with Mata have been held up because United would prefer him to sign a one-year deal rather than two or more, something that has become a trend for players that hit their 30s at Old Trafford.

Saturday’s performance against Watford did Mata no favours if he hopes to get a new deal at Old Trafford. He started from the right and didn’t have a day to remember, but most know at this stage he’s better played in behind the front men.

And, even if he does leave United this summer, it doesn’t sound like the potential role as an ambassador on offer would be dropped. He always comes across well and has a restaurant based in Manchester, so it would make sense for him to continue visiting the city.

We’ll have to wait and see what happens with his current contract first.