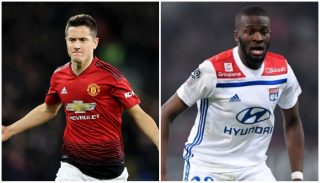 According to James Ducker of The Telegraph, Manchester United will not bow to Ander Herrera’s wage demands, despite potentially losing the midfielder on a Bosman in the summer.

This doesn’t mean United don’t want Herrera to stay but if the reported figures are true, a whopping £200k-per-week, it would be perfectly reasonable to walk away from talks, from the club’s perspective.

The Telegraph claims Herrera currently earns £80,000-per-week and that United have tabled a three-year contract with a “huge hike” on his existing wages.

At 29, Herrera is looking at his last big deal and perhaps PSG’s interest is real and they’re willing to fork out big wages considering they can sign him for free.

But it’s disappointing to hear Herrera’s head may have been turned.

Told there’s more chance of a 94th minute Rashford winner in Paris than Ander going to PSG. Ok, he’s not going to PSG. He’s v happy at MUFC and primed to score two in Camp Nou.

Meanwhile, Daily Record reporter Duncan Castles claims Herrera has agreed on a pre-contract with PSG, suggesting he would be off in the summer.

Whether he leaves or not, United probably need to sign two midfielders in the summer. To really improve the side and make up for limited options. Nemanja Matic doesn’t bring enough tempo, Paul Pogba is forever being linked with Real Madrid and United could do better than Herrera.

As good as he is, we respect what Herrera offers and would like him to stay, but let’s not pretend he’s irreplaceable or even world-class.

Many would argue that there are better all-round midfielders out there, with a number of United fans in agreement on Twitter that Tanguy Ndombele is among them.

The France international has picked up lots of attention this season for his displays in a Lyon shirt, and at the age of 22, he would fit Ole Gunnar Solskjaer’s age profile for transfer targets.

Italian outlet Calciomercato have previously linked Ndombele with Juventus and United, so interest from elite clubs isn’t something new for the French midfielder.

See the tweets below as United fans urge the club to sign Ndombele, with many believing he’d make the perfect replacement for Herrera.

Dear @Mike_Phelan_1, i know somebody who could be a perfect choice to replace Herrera if he really leaves. Should be a massive upgrade to our midfield, indeed. TANGUY NDOMBELE!👍💯https://t.co/YeNB08DHaB

Herrera and Mata out – Ndombele and Aouar in? I’d take that #mufc

Herrera going on a free? Thats fine, just get Ndombele to replace him.

If there’s truth in Ander Herrera demanding £200k-per-week from United, he should start packing his bags. I like him a lot but come on, he’s not worth that!

I hope his so-called demands are bollocks.

herrera signed a pre contract at psg, thats good for him to get his money. we just have to get a player more combatant and better than him – ndombele

If this is true and @AnderHerrera is demanding this I hope they let his contract run down and sign ndombele from lyon perfect replacement and alot younger https://t.co/5nmmDtpKBq

If Herrera leaves the Glazers have to dig deep into their pockets for a replacement, they have no faith in Fred so go out and buy ??