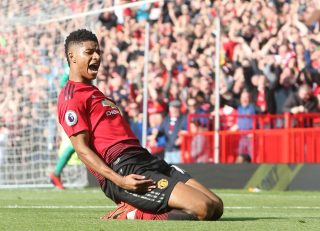 The goal came from a stunning Luke Shaw through ball which saw Rashford one-on-one with Watford goalkeeper Ben Foster, who was unable to keep the scores level after being beaten with a chip.

Alan Shearer says Rashford’s runs in-behind made the difference in the first 45 minutes.

“It was a beautiful finish from Rashford for the goal,” Shearer said on Match of The Day, as quoted by Tribuna.com.“He is in charge of the situation, it was a good first touch, he doesn’t panic and he knows what he wants to do. It was so calm. What I like about Rashford is he points to where he wants the ball playing into his path.

Since his debut for Manchester United in February 2016, @MarcusRashford has scored 45 goals for the club in all competitions, more than any other player. #mufc [Opta] pic.twitter.com/Xf0Lu2edwd

Rashford hit double figures in the Premier League for the first time with his goal against the Hornets, so he still has a lot of work to do to become a 20+ goal per season striker.

Hopefully, with the help of his new manager, Rashford will develop a knack for scoring more goals inside the box, the same way Raheem Sterling is doing for Manchester City and England at the moment.

At this level you can never settle, no matter what age you are it’s essential to keep trying to improve. The sky is the limit for Rashy. United are in for a bright future if he reaches his full potential.

Sky Sports recently stated there has been progress made between United and Rashford in regards to a new deal.