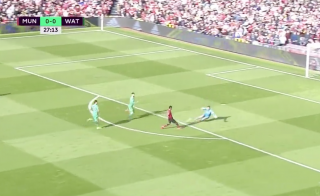 Marcus Rashford has opened the scoring for the Reds against Watford.

He found a lot of space in behind the Watford defence and a great pass by Luke Shaw successfully picked him out.

The striker leaves a fraction of a delay as Ben Foster fell to the ground before slotting home to give Manchester United an undeserved lead.

Watford had been the better side up until this point without creating any dangerous chances on goal, but United will still see the 1-0 scoreline flattering in their favour.

United hope this game will put them back to winning ways after two consecutive defeats before the international break.

Make sure to follow us on Instagram for live video highlights of every Utd game uploaded to our stories https://t.co/uHFBSQ2Ct1