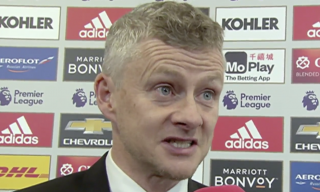 Ole Gunnar Solskjaer began his reign as Manchester United’s permanent manager with a gritty, and at times nervy, win over impressive Watford at Old Trafford.

The Reds never hit the heights of their fluent best but moved joint third in the table and level on points with Tottenham through goals from fit-again strike pairing Marcus Rashford and Anthony Martial either side of half-time.

Solskjaer was left with mixed feelings after the game, the boss was happy with the result but admitted his Reds side struggled to contain a vibrantly buzzing Hornets team.

The boss said that United were fortunate to win and the performance was more like a draw, but that results are all that matters and we’ll take the win.

It’s always difficult to kick back into gear after the international hiatus, and that – coupled with several United men only just coming back from injuries – may have had an effect on a lethargic and largely subdued showing.

Solskjaer spoke to Sky Sports and you can see his interview in full below.