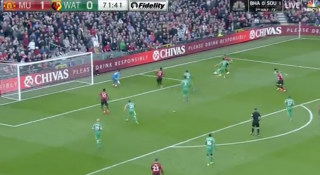 Anthony Martial has given Manchester United a two-goal cushion against Watford.

There were claims for offside but Martial wasn’t ahead of the ball, so the officials got it right as the Frenchman claimed his 10th Premier League goal this season.

It hasn’t been a convincing performance by any means, with the victors being the more dangerous side, though we will argue United won the game due to being more clinical.

We didn’t create many chances but are two goals ahead.

And, now it looks like Martial’s goal will be enough to secure three points for United.

Jesse Lingard played the ball in after overlapping Andreas Pereira on the right wing, before Martial finished after some scrappy defending.

Watch the Frenchman’s goal below.