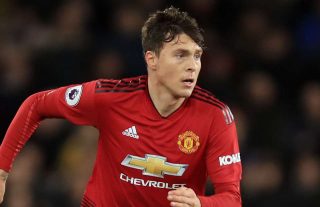 Victor Lindelof was not ruled out of Manchester United’s Premier League meeting with Watford on Saturday with an injury. It was more serious than that.

The defender rejected a call-up to the Sweden squad because his wife Maja Nilsson was due to give birth.

A valid reason to take some time off.

United manager Ole Gunnar Solskjaer revealed prior to kick-off today that Lindelof’s absence was not down to being injured but ‘some issues’.

“It is a good team we have put out. There are still a couple that we are still nurturing,” he told MUTV, as quoted by the Manchester Evening News.

“Jesse (Lingard) and Romelu (Lukaku) are yet to play a full game yet, Victor is not injured, he had some issues. But the team is good, the training week has been really good. Good focus, good intensity. It looks alright.”

But according to Injury Analyst Ben Dinnery, who has featured on Sky Sports and talkSPORT, those issues come on the back of death threats Lindelof received after rejecting a call-up to the Sweden national side.

This goes to show what weirdos get up to on the internet.

Solskjaer confirms Martial picked up a knock. “I’m not sure how he’ll be for Tues, but we’ll check on him. We’ve got a couple of days to get ready.” Lindelof missed out after receiving death threats for pulling out of #SWE squad. ‘We felt Victor was better off not playing.” #MUFC

Meanwhile, the MEN have since ran more quotes from Solskjaer after the Norwegian was pressed on the issue. He remained coy in response, not revealing too much by saying: “We felt Victor was better off not playing because he’s had a couple of things to sort out, that’s no problem. He’ll be all right.”

On Tuesday, Lindelof gave an interview with Viasat. He said: “I have not followed it so much but focused on what has been important to me and that is Maja. People always wonder what lies behind things. What I cannot understand is how people cannot respect that it is a personal reason.”

However long it takes for Lindelof, his reason is sincere and we’re fully behind him. He’s been United’s most improved player this season after cementing his spot at centre-back.

Dinnery also touched on the knock Anthony Martial suffered in the 2-1 win over Watford.

He could be a doubt for Tuesday’s clash with Wolves.