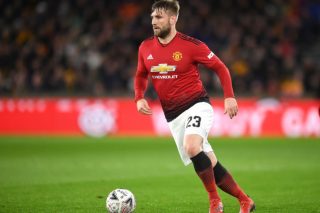 A shaky performance was defined by defensive resilience and clinical finishing as Manchester United scraped a 2-1 win over Watford in Ole Gunnar Solskjaer’s first match as permanent manager. The team will have to perform at a much higher level if they are to earn results in difficult upcoming games at Wolves and Barcelona.

As many individuals performed well as those who struggled with Watford’s compact football and tight pressing, as reflected in today’s Player Ratings.

Forced into many saves today, the Spaniard was never particularly stretched, though his distribution of the ball looked a bit rusty at times. He has another gear but played well enough.

Young struggled in attack and at times was pulled out of position in defence, particularly losing his man for the cross which led to Watford’s only goal of the match.

Smalling loses a point for his involvement in Watford’s goal after a solid performance, particularly in the air where he made many decisive contributions. He seems ultimately the more likely of today’s defensive pairing to be replaced by Victor Lindelof when the Swede returns.

One could argue that Jones deserved a clean sheet. The England international was everywhere in defence, making crucial tackles, headers, and interceptions at the right time. He seems to be fighting for his place at the club and based on this performance, he’s winning.

One of the individual displays of the season from Luke Shaw with defensive marauding, accuracy and power in the tackle, and the contribution of the match with a textbook swinging pass for Rashford’s opener.

The Serb struggled throughout the match, being dragged out of position, missing passes into the middle third, scapegoating his centre-backs by retreating very deeply, and escorting Watford midfielders into the channels. Scott McTominay deserves a return to the side at Wolves.

The midfielder started brightly before fading into his own third and becoming anonymous and also struggling with the man-marking of Watford’s fluid midfield. Perhaps both he and Pogba suffered from the lack of platform provided by Matic.

As usual, the Frenchman made some excellent contributions with brilliant passes to penetrate the defence, and on some level, he could have come away with an assist.  Equally though, he struggled in the middle third and didn’t look sharp with little time on the ball.

Struggling from the right wing early in the match, Mata found more success moving into a central area, despite ultimately being uninfluential. He may start again next week given Jesse Lingard’s struggles after coming on.

Another player who looked very poor in the beginning of the match, Rashford snapped out of it to finish Shaw’s wonderful pass with ease and kicked on solidly throughout the rest of the match.

While he made silly decisions at times, the winger looked his menacing self once again and benefitted from his free role in the 4-4-2 diamond, coming inside and scoring a goal superbly. Martial seems likely to be a starter under Solskjaer next season.

This could have been a match in which he won a place in the side, but Pereira didn’t have much of an opportunity to do so and was ineffective as a substitute in this match.

Lingard struggled with the pressure on him in a central role, adding credence to the idea that Mata did well in a difficult role today.

Given Rojo’s status as an outcast in this United squad after a series of injuries, a short cameo in which he looked unsteady and played a part in Abdoulaye Doucoure’s consolation goal was not ideal.