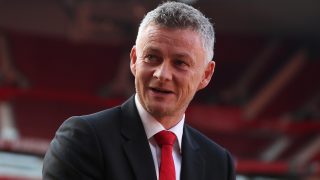 The real work starts here. When Ole came in as caretaker manager, his job was to reunite the dressing and boost spirits between December at the end of the season.

It was a free hit at a dream job for the Norweigan, one he was never going to turn down and one that could have immediately swallowed him up.

I don’t think Solskjaer saw it that way. He overcame hurdles and got United back to winning ways, with the Reds winning 14 of their 19 games under the club icon, all while Sir Alex Ferguson smiles in the stands.

Ed Woodward had no other choice but to appoint him. His results and style of play have surprised United fans, who now feel as though their manager sings from the same hymn sheet as them.

But we must now see the club back Solskjaer financially, as has been briefed with The Independent’s Miguel Delaney claiming United are willing to break the club’s record transfer fee this summer on targets Raphael Varane and Jadon Sancho.

Today we see Solskjaer take charge of his first game since becoming the permanent manager at Old Trafford. I’m excited like I am whenever United play, but the players should be aiming to put on a show as they did against Cardiff City in his first match as caretaker boss.

It remains to be seen what shape our players are in after the international break. Many of them looked exhausted in previous outings for United so hopefully, they’ve refilled their tanks in time for kick-off at 3pm.

Mason Greenwood could feature against Watford with Marcus Rashford, Romelu Lukaku and Anthony Martial all missing out on the internationals due to injury.

Solskjaer gave a briefing to the official Manchester United website on Friday. He said Alexis Sanchez, Matteo Darmian and Antonio Valencia all remain out, but one or two players would undergo late fitness tests.

However, The Sun now claims Lukaku could make an early return from his foot injury and start against Watford.

The Hornets shouldn’t be taken lightly. Like Wolves, they sit just outside the Premier League’s top six and are capable of turning any top side on their day.

Whoever plays in defence must try to keep Troy Deeney quiet. He’s in top form at the moment.