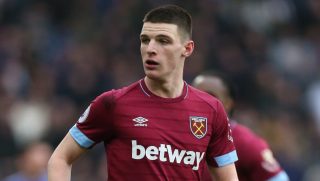 Manchester United have reportedly made an opening offer of £40 million to West Ham for Declan Rice.

The 20-year-old has impressed this season, establishing himself as a key figure for the Hammers while controversially turning his back on Ireland for England.

Joining #MUFC could see @_DeclanRice win back the hearts of some football supporters living in the Emerald Isle. What? That’s how I’d pitch it to him. More love, less BS. #UpTheReds 😉

While Rice has established himself in the West Ham midfield, he initially came into the team as a centre-back. It will be interesting to see which position becomes his best and it sounds like United are interested in finding out.

This might see a quality young player who meets the requirements for a future United defender or midfielder, as it’s a bonus to have a player with the versatility of that calibre.

Schira used Twitter to reveal his information that United have launched a first bid of €40 million for the youngster, with talks said to be progressing between the two parties.

#ManchesterUnited are really interested in signing Declan #Rice from #WesHam for the next season. First contacts ongoing between #RedDevils and Hammers. #ManUtd‘s first bid is €40M. #transfers #MUFC #mutd

It remains to be seen whether this is true or if United can get Rice for €40 million. In today’s market, that’s a good deal for a player of his potential who is already a full international.

Hammers boss Manuel Pellegrini hinted on Friday that it would take a significant bid to secure a deal for Rice, as reported by the Guardian, with their story also mentioning United’s interest.

It doesn’t sound like Pellegrini will keep the player against his will, if he does want to move on, but United could certainly do with reinforcements in midfield. Paul Pogba will be a starter next season, though an improvement could be possibly made elsewhere in midfield so it’s definitely addressed.