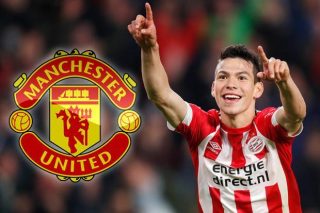 PSV Eindhoven winger Hirving Lozano’s impressive season has seen him linked with several of Europe’s heavyweights. According to Goal.com, Manchester United are, as ever, among potential suitors of the highly rated 23-year-old.

According to Jesus Martinez, the president of the player’s former club Pachecho, the Mexico international has channelled his inner Paul Pogba by claiming it would be a “dream” to don the red of United. It comes after Pogba publicly admitted (via BBC Sport) that, although happy at United, a move to link up with compatriot Zinedine Zidane at the Bernabeu would fulfil a lifelong ambition.

But it’s a well-worn cliche trotted out so many times when a player is set for a big-money move abroad, that it’s hard to read too much into it.

United are among a host of major European clubs linked with making a move for Lozano, and Pachuca president Jesus Martinez has revealed the Red Devils have been long-term admirers of the winger. The club has reportedly had scouts tracking him since he was 16.

Although I don’t know much about Lozano (aka “Chucky”), it’s no secret that Manchester United need a winger and he is sure to be one of many players in that position to be linked a transfer to Old Trafford in the coming weeks as the season reaches a denouement.

And who doesn’t dream of playing for United?