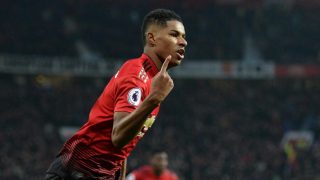 Marcus Rashford is reportedly open to signing a contract extension with Manchester United after Ole Gunnar Solskjaer was made permanent manager.

That’s according to Sky Sports News, who claim Rashford and the club have had positive talks over a new deal.

It’s a relief but no surprise to hear Rashford is happy at United. David de Gea’s ongoing contractual situation doesn’t sit quite right with us, but it sounds promising that Rashers will be signed up on a long-term deal soon.

While the England international had a mixed season under José Mourinho, he’s been a lot better under Solskjaer but looked exhausted before the international break. He earned a spot in the England squad but pulled out with an ankle injury.

The academy product has the ability to become one of the world’s best attackers. And there are early signs of a strong partnership with Romelu Lukaku.

Rashford has 12 goals to his name so far this season, providing a total of 6 assists. His late penalty against Paris Saint-Germain put United through to the Champions League quarter-finals.

He still needs to become a 20+ goal per season striker, but we must not forget Rashford is just 21-years-old.