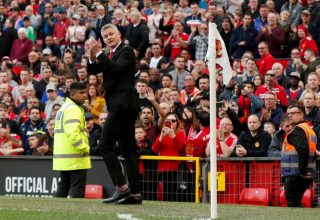 Well, there you have it. After 19 games Ole Gunnar Solskjaer is finally confirmed as the permanent man at the Manchester United wheel.

14 wins, two draws and two losses in all competitions really is a remarkable and (at the time of his temporary appointment) quite remarkable. Solskjaer has earned the right to lead us for the foreseeable future. An audition that has included wins against his rumoured rival for the job in Mauricio Pochettino. Not many would have given the Norwegian a chance after what he had to inherit. Going back to basics but also showing a keen tactical eye has put any doubt aside from his last outing in the Premier League as Cardiff manager.

He has shown, as he did in his playing days, by learning from those mistakes from afar.
What a journey and a story it has been. A romantic but curious appointment has turned out to be just what the club craved. So far, so good.

But now the real work begins. Two back to back defeats against Arsenal and Wolves have brought United back to reality. The defeat in the FA Cup has narrowed our chances of coming away from this season with a trophy.

Arsenal strengthened their grip on fourth position and left us playing catch up once again.
United need Champions League football next season and all efforts should be focused on achieving that. Spurs, Arsenal and Chelsea are resurgent now and it will be a real fight until the end to get that last spot.

What will really define Ole’s legacy at United will be how much the club invest in the summer.
The club has tied down Anthony Martial, Phil Jones, Chris Smalling and Ashley Young but doubts remain around Ander Herrera, Juan Mata and most importantly of all, David De Gea.
Herrera has been a very important player for the new regime and not being able to tie him down would be a mistake. A key cog in a more industrious, battling midfield, Herrera has spearheaded many victories under Solskjaer.

Ander’s Spanish colleague, Mata, has been in and out of the first eleven dampening his impact. He has never been a key figure at United but his quality is unquestionable. United’s style of play doesn’t seem to suit his style and because of that, it will probably be a sad goodbye.

The most interesting aspect of the summer will be new signings. The squad has needed quality for a while and after the shambolic goings on last summer, United really need to get it right.
I said in a previous article that the club needs to stop with half measures and fully commit to a managers transfer targets.

This might be affected by our position in the league at the end of the season but in the past, we have made big signings (Falcao, Di Maria) without any European football.

A lot of players have been linked as usual but how many will actually sign is another subject altogether.

Kalidou Koulibaly has been linked since the January window (via ESPN) and seems to have all the necessary requirements we are craving at centre back.

The Senegal international will be 28 in June and is an excellent all-round central defender. The transfer price would be very high but in this market, you have to go way beyond the premium.
Chris Smalling and Victor Lindelof have been performing very well as a partnership recently but history has shown that injuries and lack of form are not too far away from our defensive options.
Phil Jones and Marcos Rojo are not only injury prone but also lack the quality that is missing. Jones will be sticking around a lot longer with the ink still drying on his new contract but Rojo’s days seem numbered.

Eric Bailly is another with injury issues but his awful performance in Paris underlined a lack of awareness in crucial areas at the top level. Yes, he was played slightly out of position that night but a lack of consistency has haunted United’s defence for far too long. The Reds can’t ignore the lack of quality in the defensive area any more if they want to push on beyond this season. It would be short-sighted to not accept we are in need of a dominant force.

At full-back Matteo Darmian, Ashley Young, Diogo Dalot and Luke Shaw are all regulars in their own right.

Luke Shaw has been tremendous this season and added a more effective attacking element to his game. The same can be said of Dalot in his first season. At 20-years-old and playing only his second senior football season he has been a breath of fresh air.

The Portuguese only made six appearances in Porto’s first team and has been thrown into Premier League football this season. He has adapted well and been very steady but United should be encouraged by his start to his career at the Theatre of Dreams.

Ashley Young will divide opinion, a great pro, has valuable experience and he is the captain. Much like Matteo Darmian though, The Reds really need better quality at right back. Dalot can play there but it’s a lot to place on the shoulders of a player who is not experienced enough yet. Young has a new contract but I think a better option is needed in that area.

Take it for what it’s worth but Aaron Wan-Bissaka is another transfer rumour doing the rounds, as per The Independent. A very competent full-back who had been singled out for praise many times by the pros on Sky Sports and Match of the Day. It is clear that he is very highly thought of in the game. Yes, he doesn’t have much experience at the top level apart from this season but you can’t ignore his constancy. Any signing the club makes is always going to come with certain risks. There are no guarantees with any transfer. More and more clubs are taking a chance and signing young potential with the hope they will excel. Who is to say Wan-Bissaka won’t be even better next season and his transfer value doubles? United took a chance on a young full back from Southampton a few years ago and with Dalot last summer. If you give players time to develop and find their own way like we believe Ole will then that’s a very exciting prospect.

Midfield and attack are going to be the most intriguing developments during the next transfer window. We have the quantity but do we have the quality? Under Solskjaer we have looked much improved going forward but in some games, we need that extra bit of magic when Paul Pogba isn’t providing it.

Joao Felix from Benfica is another young star in the making doing the transfer rumour rounds.
Our attack right now seems based on interchangeability between the front three and Martial, Rashford and Lingard did that very well at the beginning of Ole’s revolution. That has slightly morphed into Rashford and Lukaku playing more like a front two due to injuries and a tactical readjustment. Which leads to the question, where does Alexis Sanchez fit in all of this? He is the man being left behind again and all sorts of names in his position have been linked to the club.

Jadon Sancho seems to fit the United way right now and is in the traditional mould of a tricky, fast winger with an end product that we have been crying out for.

A lot needs to change for Sanchez in the last few months of the season to convince the new boss he has something we can’t do without. At the moment he is losing that battle.

With his permanent appointment now being confirmed, Solskjaer now has that power to make these difficult decisions. He has already shown he is ready to make those decisions and now it is a very important time for the club.

One big decision had been made and the club can now look to the immediate future and plan ahead. Let’s not get this one wrong. Give the man what he wants and needs. United have a man with the club ideology in his blood and he has a clear way and direction of how to play his way and The United Way.

Don’t mess this one up because it feels like we have to get this right for next season. We have drifted as a club for far too long now. Let’s throw everything behind the new manager and take big risks. Let’s be bold and show we still have the desire to be the best.

After all, that is what made this club great in the first place.