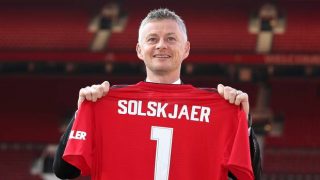 There is a tinge of irony that, where two of the greatest managers of their generation had baulked at the job of Manchester United manager, Ole Gunnar Solskjaer – a relative managerial rookie – has made everything look easy. Despite his CV paling into insignificance compared to his two more illustrious predecessors, Solskjaer has turned from short term make-do-and-mend to the man to lead Manchester United forward.

Of course, it is a risk and if this turns out to be yet another false dawn, then so be it. Ole can leave with his head held high safe in the knowledge that he will forever be synonymous with this club’s rich tradition and history. A tradition and a history that is ready for him to write his name into as our 21st permanent manager. It is one that he understands and embraces to a ‘T’ having plied his trade under his mentor and the greatest of them all in Sir Alex Ferguson, and an ideology stamped all over his United side in a manner conspicuous by its absence as the club has lurched from one mistake to another. He’s only been in the job for three months but his vision is clear.

The club had fallen into the trap of going for the big name, throwing money around and gambling on instant success. History suggests that is not the way to run any football club, never mind the biggest in the world.

We thought that the United hot seat would prove to be Mourinho’s true calling after years of admiring glances and a softening of his egotistical demeanour whenever the question popped up. But instead, it just ended in achingly familiar fashion. It wasn’t his dream job, indeed for the most part he looked as if he never wanted to be there.

From the moment a misty-eyed Solskjaer, the Mourinho antithesis, sent his captivated audience into an ethralled stupor in his first presser as permanent United gaffer, it felt different this time. You felt that this really was the realisation of a lifelong ambition for a man who must have thought this moment would never come. Especially after his first foray into senior English management ended amid calamity at Cardiff, but it appears dreams really do come true for a humble, happy go lucky and softly spoken guy from Kristiansund on Norway’s westernmost tip. An upbringing that has taken him, however improbably, to arguably the biggest, best but most difficult job in football.

Never has the Sir-Bobby Charlton christened moniker of the Theatre of Dreams seemed more ethereal and appropriate.

Finally, six years down the line, United have a manager who just simply “gets us” us a club. Someone who is, above all else, one of us. A Red. He loves us, we love him, and even rival fans have been queuing up to wish Ole good luck in admiration.

By travelling back in time, United have reset the clock and paved the way for a brighter future. With the UK Government in a mess, mayhem and a permanent state of unrest and flux, those gunning to be caretaker Prime Minister in Westminster’s crumbling corridors of power should take notes from Ole.