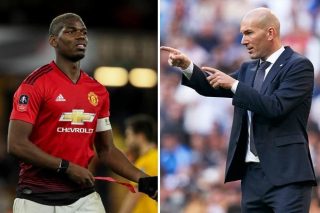 Paul Pogba made it clear during the international break that his dream is to one day play for Real Madrid. The France midfielder did make it clear that he is happy in Manchester, but his comments will still add to the ongoing transfer rumours.

You could say his comments were enough to put the Spaniards on red alert. We can see that from what’s being reported in the press.

NEXT: Man Utd Round-Up: Will top players want to play under Solskjaer?

“At the moment I’m happy in Manchester. I play. There’s a new coach,” Pogba said, as per BBC Sport.

“Real Madrid is one of the biggest clubs in the world. I’ve always said it is a dream club for every player.”

People are entitled to feel whatever way they wish about what Pogba said, but it is a dream for every player to play for Madrid. The same way people dream about playing for Manchester United.

However, Los Blancos are ready to make Pogba the cornerstone of the club’s rebuilding plans with a big bid for the United star, claims The Sun. Their two main midfield stars – Luka Modric and Toni Kroos – are kicking on, so now is the best time to work on adding to the squad. Especially after what has been such an underwhelming campaign for the European champions.

Madrid are reportedly willing to make his wish come true with a bid worth more than £125 million to land the World Cup star.

Pogba may have revealed last week that Madrid remains his dream, now managed again by French icon Zinedine Zidane, but we don’t think he will be leaving Old Trafford this summer.

He’s only really got started since Ole Gunnar Solskjaer’s arrival and things are already looking up for the midfielder. Why leave now when there’s unfinished business?