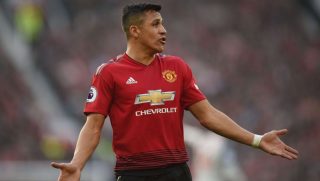 According to Miguel Delaney of The Independent, Manchester United plan to offload Alexis Sanchez to help address the wage bill.

The former Arsenal attacker is currently the club’s highest paid player despite being a total flop since his arrival over 12 months ago.

It now sounds like United are actively trying to sell the Chile international this summer, but offloading Sanchez won’t be easy.

Nobody will pay him anywhere near the money he gets at United and he’s under contract at Old Trafford until 2022, as per Transfermarkt. They also claim he is has a market value of £40.5 million.

Maybe Sanchez will look to join a less demanding league to cater for his dwindling ability as a footballer. He looks past it, not a patch on his former self.

It is doubtful Paris Saint-Germain will have any interest in Sanchez and they’re one of a few clubs able to spend ridiculous money unless he fancies moving to the Chinese Super League?

That’s one route Sanchez could take but we must remember he’s still under contract and may decide against potential transfers.