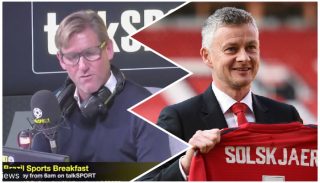 Former Crystal Palace owner Simon Jordan doesn’t think Manchester United are closing the gap on their rivals any time soon on the back of Ole Gunnar Solskjaer’s appointment.

“Pep, Poch & Klopp are better managers than Solskjaer so how are #MUFC going to bridge the gap?”

He was on talkSPORT, saying: “Ed Woodward, it doesn’t surprise me he’s made this appointment. It’s very difficult for him to not make the appointment because the performances have been diametrically opposed to everything that was dark under Mourinho.

“But the reason I say this is an unavoidable mistake is I put myself in this situation and say ‘Would I have done the same thing?’ I think Manchester United are in a very difficult position. They’re six years away from having last won the Premier League. There have been three sides better than them, maybe four: Man City, Liverpool, and Tottenham.

“United can bridge the gap players wise, but he [Solskjaer] is the conundrum. There are three better managers than Ole Gunnar Solskjaer. Guardiola is clearly leading the elite management right now. Klopp is not far behind. And Pochettino who’s doing great at Spurs. My prediction is the biggest club in the world ain’t gonna bridge the gap with these three, certainly two clubs.”

NEXT: Man Utd need to be fighting for all the big prizes next season, claims Berbatov

Who is the fourth team supposedly better than United? United’s record in the league since Solskjaer’s arrival has tipped the rest, and the evidence below suggests Jordan is miles off the mark with his view on the Norwegian coach.

How can he be ahead of Guardiola and Klopp in the elite category of football manager when he’s new to the biggest stage of the game, as a manager? Everyone had to start somewhere and you would be hard pushed to find a United fan who doesn’t believe Solskjaer deserved the job.

There will be people waiting for Solskjaer to fail as United manager, but that will never change. It would be a great story if he could bridge the gap that is currently seen at the top of the Premier League.

United can challenge next season as long as they recruit well in the summer. Not a repeat of last year’s bullshit.