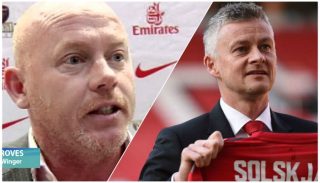 Solskjaer was made permanent manager on Thursday, therefore, his job has gone from reuniting the dressing room to taking United back to the top of English football.

The hard work starts now and United will need to recruit well in the summer to have any chance of mounting a challenge next season. Several departments need to improve if we’re to meet our objectives, such as the defence and midfield.

The club has yet to find an agreement with David de Gea over a long-term deal and now Solskjaer has a bigger role to play in persuading the Spaniard to stay.

There have been plenty of encouraging signs since Solskjaer’s arrival in December, with United winning 14 of their 19 games under the Norwegian. But that hasn’t stopped doubts over his expertise.

“Solskjaer has signed his new contract and all the United fans are delighted, but so am I as a Gooner,” the former Arsenal winger told talkSPORT. “I don’t think they’ve got any chance of winning the title while he’s their manager.

“He doesn’t have the skill set or the experience. When it comes to November/December time and all this joy and euphoria has died down, our listens can tweet in to me.”

To suggest Solskjaer hasn’t got the skill set is interesting. What exactly does Perry know?

“I don’t think they’ve got any chance of winning the title when Ole is manager.”

“If Solsjkaer has anything about him, he should say to Paul Pogba he can go if he wants to leave.”

So far, Solskjaer has answered all of his critics, showing tactical awareness and getting the best out of his players.

The job could turn out to be big for him. United are brave to take such a risk, although that doesn’t change the fact Solskjaer became the best candidate.

United sit in 5thplace in the Premier League, two points behind fourth-place Arsenal and three adrift of Tottenham, who have dropped out of a title race with Manchester City and Liverpool.

We also have the Champions League quarter-finals against Barcelona to look forward to.

P.S. Does Groves think Arsenal will win a league title under Unai Emery?