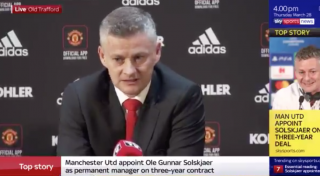 Ole Gunnar Solskjaer has just given his first press conference after being announced Manchester United manager, on a permanent basis.

The Norweigan has been responsible for United turning their season around. In December it was almost unthinkable to even suggest we’d make top four, but thanks to the arrival of Solskjaer we could finish third!

Solskjaer spoke to the press about how this is his ultimate dream job, which goes without saying, though he stressed the importance of hard work and being the best he can be.

On signings: “There’s been so many players that have been written about, so many agents in touch with our administration that want to come here. I’m sure when we decide what we have to do, hopefully we’ll get them by pre-season.”

He may not have the same level of experience as Louis van Gaal and José Mourinho, but both managers ended up sacked by United, who have gone down a totally different route of managerial recruitment.

Sky Sports have tweeted snippets from the press conference when Solskjaer promises summer signings. He also demands that United get back to winning silverware!

🏆 “I know the expectations – I want us to lift trophies”

Ole Gunnar Solskjær is speaking to the press for the first time since being confirmed as the Man Utd manager on a three-year deal.

“We will do some business this summer”