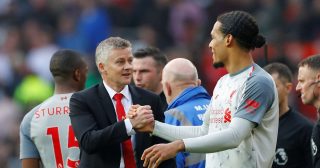 It has been reported by the Daily Mail that Solskjaer is Van Dijk’s landlord, but it seems the Liverpool defender doesn’t need to worry about having to leave as they have a contract, which was confirmed by the Manchester United manager in this video below.

After first answering questions about his aims for the club and summer dealings, the United manager was also asked about the Van Dijk situation.

Kris Voakes of Goal interpreted it as a good thing, with Solskjaer not seemingly arsed about it. It’s not as if the pair couldn’t find accommodation elsewhere.

Ole says he won’t be kicking Van Dijk out of his house… “We have got a contract there!” #MUFC

Ole: “I’ll always be myself. I’m not going to change. We’ll do this together.” #mufc [beIN] pic.twitter.com/eQ7cATg7YO

It’s sure to become a joke that the manager of United rents his house to Liverpool’s best player.

Now that Solskjaer will remain United manager on a three-year contract, he must find a home for he and his family to live in.

Ideally, he would have moved into his Cheshire home in December when appointed caretaker manager.

But it sounds like he will either have to wait or find temporary accommodation.

We don’t think he’ll have any problems in that department.