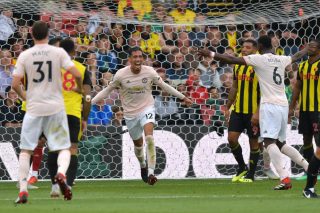 With the last international break of the season out of the way, Manchester United restart their pursuit for a top-four finish in the Premier League when they welcome Watford to Old Trafford on Saturday.

Ole Gunnar Solskjaer has turned United’s season around, but two consecutive away defeats dampened spirits a little before the players went out on international duty. Luke Shaw, who pulled out of the England squad with injury, reportedly held one-on-one talks with Solskjaer after the FA Cup defeat to Wolves, as reported by the Daily Mail.

NEXT: Ed Woodward flies to Amsterdam, but not for Man Utd transfers

So we need to bounce back quickly as April proves to be a tricky month for the Reds, with two legs in the Champions League quarter-finals against Barcelona coming up.

Romelu Lukaku has been nursing a foot injury prior to the international break, therefore, we’ll have to wait to hear from Solskjaer at Friday’s press conference before completely ruling the Belgian striker out.

Meanwhile, Marcus Rashford and Anthony Martial both pulled out of their games for England and France respectively, while Alexis Sanchez will be lucky to play for United again.

This means Solskjaer faces a potential injury crisis and it remains to be seen whether Jesse Lingard can get back to full fitness in time. The boss may even have to call upon academy graduates such as Mason Greenwood and Tahith Chong against Watford.

Watford will provide a test for United, but the Reds should have too much quality for them, even with injuries. They’ve beaten us just once in our 11 Premier League meetings, with United winning the other 10.