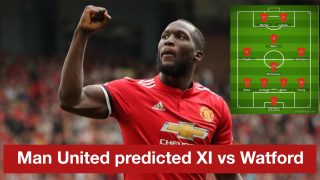 At last, the international break is over and Manchester United will return to Old Trafford to play Premier League football. The break would have felt like the longest in a while for the United faithful, who witnessed consecutive high-profile defeats at Arsenal and Wolves before Ole Gunnar Solskjaer’s men parted ways to represent their respective nations.

After being dealt a blow to their Champions League qualification hopes and losing out on their best chance of silverware this season, United must bounce back against Watford to keep the season on track and restore form, particularly with a tasty Champions League quarterfinal tie at Barcelona looming large.

NEXT: Ed Woodward flies to Amsterdam, but not for Man Utd transfers

Many players performed well below their usual standard against Wolves, widening the options for any predictor of Saturday’s lineup. Solskjaer has little room for error after two poor managerial performances and particularly given Watford’s excellence this season under Javi Gracia.

Sergio Romero’s excellent FA Cup display was rendered meaningless by defensive errors, but regardless, David de Gea will return to the lineup and attempt to earn another clean sheet. This season seems likely to be the first in five in which the Spaniard does not reach the PFA Team of the Year, and he can partially blame the rest of the side for that.

Honesty is the best policy, and to say that Diogo Dalot struggled with the threat of a Wolves side comprised of many of his compatriots would be an understatement. The fullback is either still adapting to the rigours of senior football, adapting to the rigours of English football, or is more suited to playing further up the pitch, and while his future is evidently bright, Young is highly likely to return to the lineup this weekend.

Chris Smalling and Victor Lindelof fell into the trap of Wolves’ excellent attacking duo last time out, and given that a change to the defence is the appropriate reaction, it seems more likely that the former will make way. Eric Bailly scored an excellent goal for Ivory Coast over the international break, and, barring his injury scare in the same match, should start against Watford.

Joining him will be the Swede who could stake his claim for United’s Player of the Season Award over the upcoming months. Lindelof’s emergence as not only a great defender but a leader in the United side leads to the belief that he will be one of the key players in the Red Devils’ hopeful title challenge next season.

The defender showed spectacular form and fitness in the weeks leading up to the international break before slipping up against Wolves, but he isn’t the first or last player on this list for whom that statement applies. Having fully recovered from his mid-season dip in form, Shaw will use the following two matches as preparation for the daunting task of defending against Barcelona’s right side.

Perhaps Nemanja Matic is the more likely candidate to start against Watford, but Scott McTominay deserves it more. United were undefeated in four matches with McTominay in the side, in a run that included a draw against Liverpool and win at Paris Saint-Germain. They lost consecutive matches after he was dropped for Matic, who returned from injury.

Solskjaer’s decision to drop Fred from the side against Wolves was no more warranted than the removal of McTominay in the previous match, but in order to maintain some degree of consistency in the side, Ander Herrera should retain his place. Herrera will be crucial in the tie against Barcelona given the likelihood that he is tasked with man-marking Lionel Messi.

The declining effectiveness of United’s midfield in recent matches has forced Pogba to function as a normal central midfielder instead of the attacking force which destroyed the Premier League for the honeymoon period of Solskjaer’s reign. While he is a great natural midfielder, he is all the more effective when given license to attack at his own pace, and he will be looking to rediscover that freedom against a side whose 4-4-2 midfield should be numerically mismatched.

One might argue that Juan Mata does not fit into the side as well as Jesse Lingard, but the England international’s performance against Wolves warrants dropping and the Spaniard seems to be the first in line to take his place. Dalot could be deployed as a natural right-winger and Andreas Pereira is arguably in better form than Mata, but of the three options the Spaniard offers the most creativity and fits in with the following two strikers best.

Absent against Wolves with a minor injury after a series of crucial performances for United in the preceding weeks, Romelu Lukaku’s deserved reclamation of his position comes after one of Marcus Rashford’s worst performances this season.

While Rashford’s late goal could sway Solskjaer to pick him ahead of Anthony Martial, it shouldn’t. The French forward’s disappointment against Wolves was as much due to his struggles with consistency as it was due to the inability to find him in good areas, as he was either too deep or too wide to have an impact on goal almost every time the ball reached him.