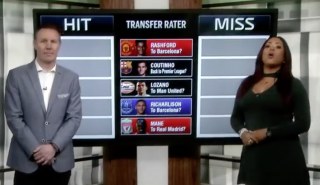 ESPN FC’s Craig Burley addresses all the latest transfer rumours and more, including speculation that Barcelona will make a move for Marcus Rashford this summer.

This feature allows Burley to rate each transfer as he casts his opinion on each piece of speculation, claiming whether it’s a hit or miss.

NEXT: Preview: Man Utd have too much quality for Watford, even with injury-hit squad

Burley takes what appears to be a dig at Paul Pogba when discussing the Rashford links, by stating the player is not coming out in press conferences saying he dreams of playing for other clubs like the Frenchman did when asked about Real Madrid on international duty, as per BBC Sport.

While he’s probably right, Rashford doesn’t seem the sort who wants friction between him and the club, whereas there is always a feeling that Pogba will move on one day. However it is important to note that Rashford didn’t take part in the internationals, so conducted no media interviews during the break.

Burley importantly added: “He’s a Manchester boy playing for the club I believe he supported. Everything has gone on an upward trend now. Mourinho has gone and he’s getting [more] game time.”

The ESPN pundit went on to dismiss the Rashford rumours as a miss.

There was a mention for Philippe Coutinho too, in relation to a return to the Premier League amid rumours United are interesting in signing the former Liverpool playmaker who hasn’t completely had his way at Camp Nou over the past year.

Burley doesn’t even mention United in the above segment, instead asking whether Liverpool would take the Brazilian back. He seemed unsure but still classified the story as a hit rather than a miss…

That leaves us with PSV Eindhoven winger Hirving Lozano, who many will remember from last year’s World Cup with Mexico. The national team coach, Gerardo Martino, has even stated that he feels it is time for Lozano to make a big move in his career, as reported by Goal.com.

Anyhow, Lozano to United rumours were immediately dismissed by Burley. He notes that this is a good player but states the Reds should be aiming higher if we’re to catch up with other teams ahead of us in the league.

He doesn’t see United spearheading European football with Lozano, but perhaps he could become an important squad player? We need more players for the right side of attack and he remains an option.